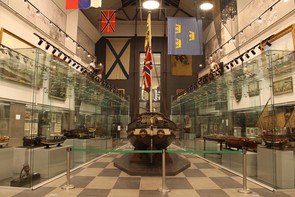 The expositionhall tells the story of navigation since ancient times, the creation of a regular fleet in Russia, the outstanding victories of the sailing fleet and its development before armored shipbuilding. The hall exhibits unique ship models, samples of weapons and equipment, domestic and captured ship flags, paintings, drawings by Russian and foreign artists and other rarities.

The excursion around the hall discusses some interesting and important items:

1. From the sea voyages of the ancient Slavs until the Battle of the Neva;

2. The Russian state at the beginning of the XIX century and the capture of Kazan;

5. The first ships of the Russian Navy until Peter I;

8. Navy after the death of Peter I;

10. Geographical discoveries of Russian explorers at the beginning of the XIX century;