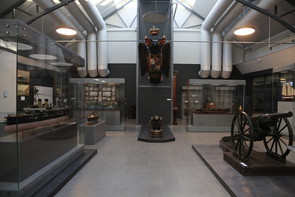 The top level of the hall is dedicated to one of the Russian naval expeditions to North America in the 1863-1864's, the development of the Russian Navy after the Eastern (Crimean) War of 1853-1856's, the creation of new classes of ships, the Russian-Turkish war of 1877-1878's, the struggle between armor and artillery and the visit of Russian squadrons in foreing lands.

The excursion around the hall discusses some interesting and important items

4. The armored Russian fleet in the Baltic Sea and the Black Sea at the end of the XIX century;

5. The development of the submarine fleet;

7. Franco-Russian alliance and the friendly visit of the Russian squadron to Toulon in 1893 year.