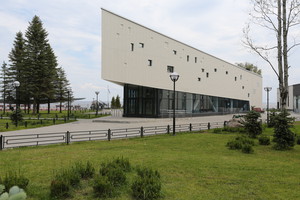 The modern museum building was finished by the Navy Day of 2016. The shape of the building symbolises a piece of Ladoga ice. After the construction was finished, hard work started in order to create the main exposition of the museum. Today the exposition that naturally complements the large exhibits located outdoors tells the story of the creation and functioning of the ice route that saved thousands and thousands of lives of the city defenders and its inhabitants.

The new exposition of "The Road of Life" complex is based on new research materials contributed by the photography collection of the Central Naval Museum and the Central Naval Archive (located in Gatchina). Nevertheless, they were added to an already existing and often supplemented main museum exposition.

It tells about a vast range of topics, starting from the past of Ladoga to the beginning of the Great Patriotic War, the siege of Leningrad, the first and the second war navigational seasons, the creation of the ice route and its defense, the positioning of a pipeline and an electric cable line on the bottom of Ladoga and the actions of the Ladoga Navy.

The expositional complexes include:

1. The past of Ladoga

2. The beginning of the Great Patriotic War

3. The first wartime navigation. The autumn of 1941

6. Preparatory works and the beginning of the second wartime navigation. The spring of 1942

8. Laying of a pipeline and an electric cable line on the bottom of Lake Ladoga. 1942

11. The construction and functioning of the Road of Victory. 1943

12. The end of the Great Patriotic War