History of establishment of the branch 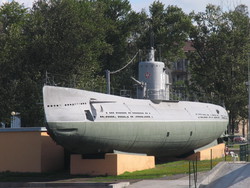 Long before the issuance of this order, municipal, industrial and veteran organizations put in a lot of effort to reconstruct the D-2 submarine into a museum complex.

In 1984, a joint decision was taken by the Naval Ministry and the Ministry of Shipbuilding, specifying the scope of reconstruction and its cost.

It was planned to involve more than 25 different organizations in the restoration of the submarine.

The specific feature of its re-equipment was the need to restore the appearance of the submarine as it was in the Great Patriotic War, and to renovate all its systems and the equipment in the compartments.

The reconstruction project was carried out by the employees of the Rubin Central Design Bureau. Rear Admiral Ye.V. Butuzov was appointed chief developer of the restoration work; in the 1950s he served as executive officer at the D-2 submarine and knew its structure well. His team included experienced research workers and designers of the Rubin Central Design Bureau: V.P. Semonov, K.M. Krestyanshin, K.Z. Saravayskiy and others.

The specialists at the Admiralty Shipyard in Leningrad repaired the drydock and in July 1987 placed the D-2 submarine in it for preparatory work.

After its completion, the dock, together with the submarine, was transferred to Baltic Shipyard where the restoration and renovation was continued.

In the summer of 1989, the ship was taken out from the factory dock and transferred to the place of its future permanent moorage.

It took another five years to build a coastal service building with a control post and to organize due engineering support.

The memorial opening became a significant event not only for the Navy, St. Petersburg and Central Naval Museum, but also for the whole country.

Its creation encompassed the work of naval architects, shipbuilding engineers, technicians, workers and all those who served on the vessel in the harsh years of the Great Patriotic War.

It is owing to the fleet and shipbuilding veterans, the workers of related industries, that the residents of Russia and foreign countries can visit the exposition of one of the firstborns of the national subsurface shipbuilding - submarine D-2 (Narodovolets).