The history of Historical memorial hall of A.S. Popov 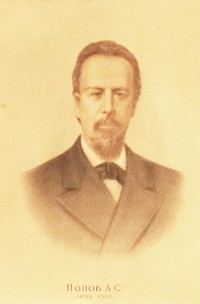 One of the most significant achievements of the human mind is radio that has had a tremendous impact on the development of the civilization.

The onset of the radio engineering development is connected with the name of the outstanding Russian physicist, inventor of the wireless telegraph A.S. Popov who was engaged in training specialists in wireless telegraphy for the Russian fleet and civilian agencies, attracting the worldwide scientific community to these tasks.

Kronstadt, Makarovskaya street, house No. 1/3 – this is the address of the Officers' Mine Training Class, one of the best electrical engineering establishments in Russia in the past, where A.S. Popov was teaching and was engaged in scientific work for 18 years.

In the summer of the same year, A.S. Popov used a similar receiver with recording equipment for recording lightning discharges - a storm indicator.

On April 24, 1906, the naval officers-miners arranged a party in memory of Alexander Stepanovich Popov in the Officers' Mine Class. At the party, an exhibition of devices created by A.S. Popov and his students was presented. It was decided to preserve this exhibition and to make it a division of the Navy training facilities.

After 2 years of hard work aimed at advancement of his invention, A.S. Popov proceeded to experiments in the sea environment, and in May 1897 the Russian ships "Europe" and "Africa" ​​tried successfully a new means of communication at sea. By 1904, 75 radio stations of Popov's system already operated in the Navy. The Russian fleet became a birthplace of the radio. A.S. Popov's introduction of radio in the fleet was promoted by Vice-Admiral S.O. Makarov who had been a close friend of the scientist for many years.

The world's first practical radio line operated from February to April 1900 ("Hogland epic") – at that time some radio stations were mounted on the islands of Hogland and Kotka. This proved to be of major importance in the situation when the battleship "General-Admiral Apraksin" was released from the rocks.

In 1899, Alexander Stepanovich created a "telephone wire receiver" on the basis of detector effect discovered by P.N. Rybkin and D.S. Trotsky, which invention was covered by a patent.

In 1904, the joint-stock company of Russian electrical engineering works "Siemens und Halske", the German firm "Telefunken" and A.S. Popov created a division of wireless telegraph based on A.S. Popov's system in St. Petersburg.

A.S. Popov was awarded with many honorary titles and awards, both in Russia and abroad, for the scientific research and its practical application, even during his life.

In 1900, he was awarded a gold medal and a diploma at the international exhibition in Paris for the presented storm indicator and a radio station under the brand "Popov - Ducrete - Tissot". The wireless telegraph was the onset of radio engineering, which became necessary in the industry, culture and many fields of science and everyday life.

The scientist outlived his invention only for 10 years, but these years were a continuation of his scientific feat.

The residents of Kronstadt are proud of the fact that their compatriot A.S. Popov was the inventor of radio, and the Russian fleet became the cradle of radio.

The history of Historical memorial hall of A.S. Popov

In St. Petersburg, near the Petrogradskaya Embankment, the silhouette of a warship stands out clearly.