The scientific activity of A.S. Popov in Kronshtadt 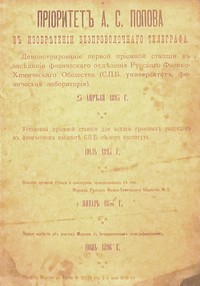 The development of technology and the complication of naval mine weaponry required the fleet staff's new level of special knowledge. In 1874, the Miners Training Detachment was formed in Kronstadt; on 1 October, the Officers' Mine Class and the Mining School were opened, that became one of the best electrical engineering schools in Russia.

Starting from 1883, an outstanding scientist Alexander Popov worked here and was engaged in scientific work for 18 years, first as a laboratory assistant at the physics room, and later - as a teacher of electricity and electrical engineering at the Officers' Mine Class and the Technical College of Naval Department. He explored the nature of electromagnetic waves and made the first demonstration of experiments with electromagnetic waves and transmission of signals over a distance in 1889. In 1895, he created "a device for detection and recording of electrical oscillations", and on April 25 (May 7) of the same year, in one of the lecture halls of St. Petersburg University, the world first public demonstration of transmission and reception of electromagnetic oscillations over a distance - that is, radio communication - took place. G. Marconi, a scientist well known in the west, filed a patent application for wireless telegraph (without demonstrating the device) in England only on July 2, 1896.

The primary development of radio engineering, the organization of first courses of wireless operators is connected with A.S. Popov's name. In September 1900, owing to his contribution, the first Russian radio shop was set up in Kronshtadt, to manufacture radio transmitting equipment. It laid the foundation of the national radio industry.

Vice-Admiral S.O. Makarov promoted the introduction of radio in the Navy. After two years of hard work aimed to improve his invention, in 1897 A.S. Popov started experiments with radio communication between the cruisers "Russia", "Africa", "Europe", extending the radio traffic length to 5 km, and in 1901 - to 150 km. In 1899, Popov created a "telephone receiver" for aural reception of radio signals by headphones and patented it.

For the first time in the world, the practical radio line operated from February to April 1900 in the Gulf of Finland between the islands of Hogland and Kuutsalo, at the time of rescue of the coast defence battleship "General Admiral Apraksin" which bumped up against the rocks at the Island of Hogland. It also became possible to save a group of fishermen carried away on the ice plate to the sea, by notifying the icebreaker "Ermak" in due time, that came to rescue. After these operations, the Maritime Ministry of Russia prescribed to equip the ships with wireless telegraphy. By 1904, the fleet had already 75 radio stations based on A.S. Popov's system.

In February 1896, at the request of the chief doctor of Kronstadt naval hospital, A.S. Popov designed an X-ray apparatus which was installed in the X-ray diagnostic room of the hospital. The same units were also installed on the ships of the Russian Navy.

On April 24, 1906, the naval mining officers arranged a party at the Officers' Mine Class to commemorate Alexander Stepanovitch Popov. An exhibition of instruments created by Popov and his disciples was organized. It was decided to preserve this exhibition and to make it a division of the Navy training facilities. It became a backbone of the present A.S. Popov's Memorial Cabinet.

The scientific activity of A.S. Popov in Kronshtadt

In St. Petersburg, near the Petrogradskaya Embankment, the silhouette of a warship stands out clearly.