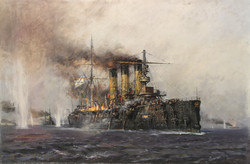 In autumn 1903, the cruiser Aurora set off for the Far East as part of a detachment guided by Rear Admiral A.A. Virenius, under command of Captain 1st Rank I.V. Sukhotin. In connection with the outbreak of the Russian-Japanese war it was returned to Russia from the Red Sea. The second commanding officer of the Aurora was Captain 1st Rank Evgeny Romanovich Yegoriev - an experienced seaman who had served in the sea in the Far East for many years and who had commanded four ships before being assigned to command the Aurora.

The Aurora was assigned to 2nd Pacific Squadron under command of Vice Admiral Z.P. Rozhdestvensky; in September 1904 the detachment set off for the rescue of Port Arthur beleaguered by the Japanese. The navigation took place in difficult maritime and climatic conditions and involved numerous coal pickups in the open sea made by the whole ship's crew, including the officers. During the coal loading, the ship’s band, cheering the crew, was playing bravura music. The Aurora invariably requiredr record-breaking amounts of coal, even double amounts - up to 1,300 tons, which was appreciated even by the squadron commander who was normally chary of praise. In December 1904 Port Arthur fell, and the Rozhdestvensky squadron ships were ordered to break through to Vladivostok.

After a heroic voyage of 18,000 miles (over 33 thousand kilometres), the ships of the 2nd Pacific squadron met the Japanese fleet in the Korea Strait, near Tsushima islands. Despite the resistance, courage and heroism of the seamen, the Russian squadron was defeated. The Aurora protected the transport ships in the battle; it sustained serious damage and was forced to turn south to the Philippine Islands along with the cruisers Oleg and Pearl. The commander of the Aurora, Captain 1st Rank Evgeny Romanovich Yegoriev and 14 sailors died a heroic death in the Tsushima battle, and 83 seaman were injured. In spite of the damage, the cruiser retained buoyancy, sea stability and speed.

In the port of Manila in the Philippines, Aurora, Oleg and Pearl were interned by the American colonial administration till the end of the war. The combat damage was hastily repaired to secure the ship’s return to Russia.

On the eve of the First World War, the cruiser Aurora underwent modernization and rearmament. The combat power of the ship improved significantly. The number of 6-inch (152-mm) main battery guns increased from 8 to 14.

The Aurora took part in World War I as part of the Second Brigade of Baltic Fleet cruisers. It comprised the ships constructed right before the Russian-Japanese war and the vessels that took part in combats and battles, further upgraded. The Aurora provided the activities of the main high sea fleet, was on naval patrol service, escorted the patrols, minelaying operations and minesweeping actions, was engaged in air defence of naval bases. Its low speed prevented its use in long-range operations.

The actions of the Aurora’s crew contributed to the success of the operations of the Baltic Fleet's light forces against the German ships in the Baltic Sea and supported the Russian XII Army operations in the fight against the enemy’s land forces on the coast of the Gulf of Riga in 1915-1916.

In the autumn of 1916, the Aurora was moved for repair to Petrograd, to the Admiralty Shipyard and further to the Franco-Russian plant. Here the cruiser found itself in the midst of events of the February 1917 revolution. The crew joined the insurgent workers. One of the first victims of the February Revolution in Petrograd was the commander of the Aurora, an experienced seafarer, Captain 1st Rank Mikhail Ilyich Nikolsky who demanded strict discipline and unquestioning obedience from the crew. He refused to carry a red flag and was killed by rifle shots.

During the rule of the Provisional Government, the seamen from the Aurora were involved in the revolutionary movement, participated in a demonstration on July 4, 1917. During the Kornilov revolt (August 25-31), a composite company of the Aurora sailors guarded the Winter Palace for three days by the decision of the Central naval committee.

By the end of the 30s, the cruiser Aurora became totally obsolescent, and in May 1941 Admiral N.G. Kuznetsov, People's Commissar of the USSR Navy, signed a decree on conferring the name Aurora on one of the new cruisers scheduled to be laid down in 1941 within the project 68. The Aurora was in for scrapping, but that was prevented by the onset of the Great Patriotic War, and the cruiser continued its naval service as a submarine support ship.

When the troops of the German group “North” were already in the outskirts of Leningrad in September 1941, nine 130-mm guns were removed from the Aurora. They were mounted between Duderhof (settlement Mozhaisky) and Kiev Highway over the position of 12 kilometres. The gun crews were almost all killed in battles, but they detained the enemy, inflicting huge losses in manpower and equipment. The memorials at the Crow Mountain and Kievskoye Highway were erected in memory of the heroes of the artillery squadron “A” (Aurora). Some of the smaller-calibre guns were removed from the cruiser and transferred to be mounted on the ships of Chudskaya warship flotilla in July 1941. One 130-mm gun from the Aurora was installed on an armoured train Baltiets that successfully destroyed the enemy in the vicinity of Leningrad.

The Aurora stayed in the military port of Oranienbaum (now Lomonosov) most of the war. In September 1941, the gun crews remaining on the cruiser repelled the fierce attacks of the enemy aviation, shooting down one aircraft. The enemy shells and air bombs resulted in the ship’s numerous under- and above-water holes. There was a threat of the cruiser’s - that got a 23° list - lying over to the right side and sinking. The courageous and resolute actions of the crew saved the day. Opening the sea inlets of the opposite side and gunning the ship, the seamen set it on the ground on even keel. In September 1944, the Aurora was raised and moved to Leningrad for repair.