History of the Branch 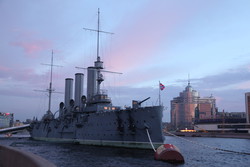 A silhouette of this early twentieth century warship is noticeable at the Petrogradskaya embankment in St. Petersburg. It is a unique monument of the history of Russia and its Navy, a museum ship – the legendary cruiser Aurora.

This ship happened to become a witness and participant of many controversial events of the intricate history of the XX century. The cruiser took part in three wars, became an active participant of the revolutionary events of February-October 1917 and was a “smithy” in training of several generations of naval officers. This famous ship has seen many great people.

Having joined the fleet of warships of the Russian Imperial Navy in 1903, the cruiser honourably carried the flag of St. Andrew and subsequently - the Naval flag of the USSR - across many seas and oceans of the world.

The cruiser Aurora is a participant of the 2nd Pacific Squadron march to the Far East, an event unprecedented in world history It was a witness of the Battle of Tsushima on May 14-15, 1905, a tragedy for the Russian Navy In addition, it served in the First World War in the Baltic Sea and was a defender of Leningrad in the years of the Great Patriotic War.

The ship, after healing its war wounds, was placed for eternal moorage at Petrogradskaya embankment in 1948, opposite Leningrad Nakhimov Naval School founded four years earlier. The Aurora became a training base for the college cadets. The future naval officers received basic maritime training there. In 1950, a ship museum was set up on the cruiser. On July 5, 1956, in accordance with a directive of the Commander-In-Chief of the Navy, a branch of the Central Naval Museum was set up on the Aurora. The first head of the branch was an honoured naval officer, Captain 2nd Rank, B.V. Burkovsky, who supervised the work of the museum for more than twenty years.

The cruiser Aurora was included in the list of monuments protected by the state by a resolution of the RSFSR Council of Ministers as of August 30, 1960.

In the years 1984-1987, the cruiser Aurora underwent major repairs and restoration at Leningrad Shipyard named after A.A. Zhdanov (now Severnaya Verf Shipyard, JSC). The ship became a host of expositions dedicated to the revolutionary and militant past of the legendary cruiser, placed in six halls. The museum became one of the most popular places of Leningrad visited by the residents and guests to the city, including numerous foreign delegations and foreign tourists. To date, the Aurora and the museum exhibition halls have been visited by about thirty million people from almost all countries of the world. The guestbook commenced as early as 1924 contains comments of the national and foreign public and political leaders, astronauts, prominent figures of science, culture, art, representatives of the public.

The inclusion of Cruiser Aurora in the Golden Book of St. Petersburg as a historical monument of the maritime capital of Russia and the Navy was a sign of well-deserved appreciation of the legendary ship. The cruiser Aurora is included in the International Association of Museum Ships.

In 2016, the Aurora found a new life after a nearly two-year overhaul at Kronstadt Shipyard.

The cruiser Aurora today is a waterborne ship with its operating systems and mechanisms securing its service life for 20 days in stand-alone mode. In fact, after becoming a ship-museum, it has retained a number of featuresof an operable warship. The ship has a military crew headed by the commander who provides for due operation of the cruiser and its proper technical condition.

Today, after the repairs and the recreation of the exposition, the cruiser Aurora, is, as before, one of the most visited museums of St. Petersburg - the city where this great ship was built and where the most of its service for the benefit of the Motherland took place.

The country's leadership has made a huge contribution in the organization and implementation of repair work on the cruiser Aurora. On the Navy Day - July 31, 2016 - the cruiser Aurora that had returned to the place of eternal mooring after the overhaul was visited by Supreme Commander-in-Chief of the Russian Federation President V.V. Putin and the Russian Defence Minister S.K. Shoigu.