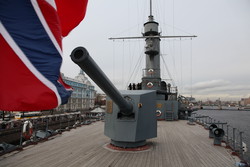 Cruiser Aurora is the last ship in a series of first-rate cruisers of Diana type (Pallada, Diana and Aurora) built in St. Petersburg in 1897-1903. The structural type is armoured (protected) cruiser. The Aurora was not significantly different from the protected cruisers of its time in terms of architecture, deployment of equipment, space layout, hull construction. The ship has three decks - upper deck, gun deck and armour deck - the so-called whaleback. There is a platform, along the perimeter of the armour deck over its inclined elements, framing the horizontal sections along the sides and at its ends. Two other platforms (one in the fore and one in the aft end) are in the hold. The interior space of the hold is divided into compartments by 13 transverse bulkheads.

The outer casing of the hull, as from the time of construction of the ship, was made of steel plates 10-13 mm thick. The centre keel with the height of 1 m had a thickness of 11 mm. The plate keel is executed in two layers: the inner layer 10-13 mm thick and the outer layer 14-16 mm thick. The underwater part of the hull was lined with 102-mm teak planks and on top of them - by copper sheets 1 mm thick. The stern posts were cast in bronze. The inner bottom extends from 22 to 98 ribs.

The armour plates placed on top of the steel coating of the armoured deck had a thickness of 38 mm in the horizontal part, 51 mm at the slants and 63.5 mm at the side slants; the glacises of engine hatches - 25.4 mm. The casings of smokestacks, elevator wells, control system drives over the armoured deck were covered with 38-mm armour protection. The pipe from the conning tower to the central control compartment had 89-mm walls. The armour of the conning tower sponson and the traverse sheet covering the entrance to the deck cabin were 152 mm thick. A protective beam of 16-mm steel sheets was installed behind the roundhouse, across the upper deck.

The armament of the ship originally comprised eight 152-mm Canet guns, twenty 75-mm Canet guns, eight (mounted on the top and the bridges) single-barrelled 37-mm Hotchkiss guns and two amphibian 63.5-mm Baranovsky assault guns. The total ammunition of 152-mm guns equalled to 1,414 rounds, housed in four cellars. The loading was separate: armour-piercing - explosive and shrapnel - shells with the weight of 41.4 kg, and powder charge in cases. The fixed ammunition - cartridges to 75-mm guns (only armour-piercers weighing 4.9 kg), with the total number of 6,240 were kept in eight cellars. The ammunition stock of 37-mm guns and Baranovsky cannons was 3,600 and 1,440 cartridges respectively. The holders with shells and cases for 152-mm guns and the holders with cartridges for 75-mm guns were fed to the upper deck and the gun deck with the help of electric-drive winches, by elevators, and delivered to the guns by monorail guides. The fire control systems were manufactured by Petersburg electrical engineering plant N.K. Geisler and Co.

The cruiser was also equipped with torpedo tubes: one above-water unit in the stempost and two under-water units mounted on both sides. The ammunition comprised eight 381-mm self-propelled Whitehead mines (torpedoes) – a model of 1898. The mine armoury included as well the spherical barrage mines: thirty-five mines kept in the hold were intended for installation from trucks or rowing boats and from the ship’s steam launches.

The cruiser had three three-cylinder steam triple-expansion engines with the total power capacity of 11,610 hp that provided the speed of 19.2 knots (35.6 km/h). Three three-blade bronze propellers with the diameter of 4.1 m acted as propulsive agents. The middle propeller had left hand rotation, the end screws rotated «inwards»: the right one - to the left, the left one - to the right.

The Belleville steam boilers (later replaced with Belleville-Dolgolenko boilers) were installed in three boiler compartments: eight boilers – in the bow and in the stern; six boilers – in the middle compartment. The overall heating surface of the boilers was 3,355 square meters, the operating pressure – 17.2 atmospheres. A chimney flue was installed over each of the boiler rooms, with a diameter of 2.7 m and height 27.4 m from the level of grates.

The ship tanks contained 332 tons of fresh water for the boilers and 135 tons for domestic needs. The stock of fresh water was replenished by two Krug-type desalination plants with a total capacity of 60 tons of water per day.

The fuel for the boilers was kept in 24 coal pits in the between-hull space, near the boiler rooms. The fuel supply was stored in eight coal pits between the armour and gun decks, extending along the engine rooms. The normal stock of coal was 800 tons, the full stock - 972 tons; it was sufficient to run 4,000 miles at the speed 10 knots.

The cruiser was equipped with steam dynamos with the total power of 336 kW that generated direct current with the voltage of 105 V. The main consumers of electricity were the capstan engine and steering gear, ventilation system fans, winches for elevators, cargo booms and for discharge of slag from the boiler rooms, spotlights, incandescent bulbs, the washing machine and the kneading machine. The electric steering gear for the Aurora was manufactured by the company Siemens und Halske. The rotation of the rudder head could be effected as well by the steam engine or manually. The steering gear control posts were located in the pilot house and in the conning tower, at the central battle station, at the after bridge, in the steering compartment. The rudder blade was manufactured of bronze frame filled with teak wood protected by sheet copper on top.

The selection of anchor chains and mooring lines was made by two anchor- and two gipsy capstans driven by the electric capstan. Originally it was envisaged to equip the ship with admiralty anchors weighing 4.6 tons, but in 1898 it was decided to use more comprehensive Hall anchors. The Aurora became the first major vessel of the national fleet equipped with the anchors of that system.

The boating stock comprised two steam launches, one 18-oared and one 16-oared longboat, one 14-oared and one 12-oared cutter, two 6-oared whale-boats and yawls. They were suspended on the davits fastened to the ship hull.

The ship had a dewatering system with a total capacity of 2,900 tons per hour, as well as other standard shipboard systems and devices. The cruisers of Diana type (the Aurora was classified as belonging to this type) were superior to all the ships of that class previously built in Russia by level of mechanization and electrification of the equipment.

The shipboard berthing space was designed to house 570 persons of the crew and to house the flag officer of the squadron along with the officers of his headquarters.