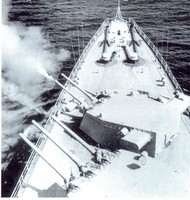 The 68bis-project light gun cruiser "Mikhail Kutuzov" (factory No. C-385) was laid on the stocks of the Black Sea Shipyard in Nikolaev (now Ukraine) on February 22, 1951. On November 29, 1951 the launch of the cruiser took place.

On August 25, 2001 the cruiser arrived at Novorossiysk where it was placed at the berth of the marine passenger terminal of the city for eternal moorage.

Returning to the 1950s, let us note that in May 1955 the first shipborne helicopters Ка-15 and Ми-1 were tested on board of the cruiser.

On October 29, 1955 the battleship "Novorossiysk" exploded in Sevastopol at the inner anchorage. A wrecking party of 35 persons from the cruiser "Mikhail Kutuzov" was assigned to render help to the battleship in distress; 27 of them perished...

In the summer of 1957, the cruiser made a passage Sevastopol - Leningrad – Sevastopol, to take part in the celebration of the Navy Day on the Neva. It covered 4,500 miles.

On September 14, 1958, the Eternal Flame from Sevastopol, Malakhov Burial Mound, was delivered to Novorossiysk on board the cruiser "Mikhail Kutuzov". The Eternal flame was lit on Heroes Square in Novorossiysk.

On March 31, 1969, the cruiser "Mikhail Kutuzov" became a flagship of the 30th Division of naval surface ships of the Black Sea Fleet.

In March-April 1970, the cruiser took part in the broad naval play-war "Ocean", where all the fleets were involved.

In 1968-1973, the cruiser "Mikhail Kutuzov" repeatedly took part in rendering "fraternal military international aid" to a number of Arab countries: Syria, Lebanon, Egypt, in the war against Israel.

Long-distance marches became a true school for many generations of seamen, and the cruiser deck turned into a breeding ground for raining military officers and fleet admirals (17 admirals, 78 1st rank captains); over 700 seamen were awarded with USSR orders and medals.

The crew of the cruiser carried the Soviet Naval ensign over many seas and oceans honourably, meeting all the tasks assigned to it. Exercising its mission aimed to strengthen peace, trust and friendship among the world nations, the ship visited the ports of Yugoslavia, Albania, Egypt, Syria, Lebanon, Romania, Bulgaria. In total, the cruiser "Mikhail Kutuzov", within the period of its active service, made 15 long-distance marches and military operations, covered over 220,000 miles.