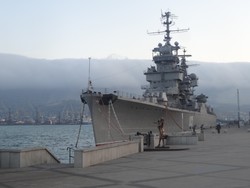 In 1994, the Presidium of Veterans Council of the cruiser "Mikhail Kutuzov" came forward with an initiative to preserve the last representative of 68bis-project cruisers, leaving it for the history as a model of the Russian shipbuilding of the 1950s, as a unique monument of technical architecture, turning it into a centre for military and patriotic education of young people and a museum propagandizing traditions of the Navy. In 1996, the international organization UNESCO took a decision to include the cruiser "Mikhail Kutuzov" in the catalogue of large ships that have become history museums and centres of federal importance.

The decision to withdraw a whole class of expensive artillery cruisers from the fleet and to demolish them was taken by the Soviet government, approved by the Central Committee of the Communist Party. Therefore, to save the ship "Mikhail Kutuzov" from the gas cutter, the same level- governmental - was required.

When the Chief of Staff of the Russian Navy, Admiral Viktor Kravchenko, learned from the Veterans Council of the cruiser "Mikhail Kutuzov" about the decision of UNESCO, he said that there was no retreat, so it was time to turn the cruiser into a museum. In June 1998, the Black Sea Fleet got a directive from the Commander-in-Chief of the Russian Navy, according to which the cruiser was withdrawn from the fleet and transferred to the Stock Property Department for further utilization.

The Presidium of Veterans Council of the cruiser "Mikhail Kutuzov" had a meeting, without delay, to discuss the seemingly hopeless situation.

A decision was taken to appeal personally to Prime Minister of Russia Yevgeny Primakov, a wise politician who knew the fleet firsthand.

Immediately, an appeal was drawn up in his name on behalf of the Veterans Council. A few days later, a letter from the "Kutuzov crew" was lying on Primakov's desk. After reading the letter, Primakov telephoned the Commander-in-Chief of the Russian Navy and said: "I revoke your directive, given to the Black Sea Fleet, to demolish the cruiser. I order to leave it within the fleet as a ship-museum!"

So, the final decision on the destiny of the cruiser was made in a seemingly casual and simple way; this decision could not be formally disputed by the Commander-in-Chief of the Russian Navy or the Ministry of Defence of the Russian Federation. The appeal of the Presidium of Veterans Council of the cruiser proved to be a success. The veterans sought a socially significant goal consistently and achieved the desired result - the cruiser remained "alive".

By the end of 1999, the Commander-in-Chief of the Russian Navy took a decision to transfer the cruiser "Mikhail Kutuzov" to the port of Novorossiysk for moorage. In the spring of 2000, the cruiser was delivered to the floating dock-30, to be prepared for conveyance to the port of Novorossiysk. On August 23, 2001, the ship, accompanied by the tug "Shakhter" (Miner), left its home Sevastopol Bay, and on August 25 arrived at port Novorossiysk. Several years passed, and the cruiser became an architectural landmark of the hero city Novorossiysk, its symbol, a living legend of the bygone era.

By the order No. 216 of the Minister of Defence of the Russian Federation dated February 6, 2012, the Military-glory ship "Mikhail Kutuzov" was included in the structure of the Central Naval Museum.

The renowned cruiser was to find a new lease of life in Novorossiysk, becoming the first museum ship in the Black Sea Fleet, a ship of military glory, a guardian of martial traditions and historical continuity of many generations of the Black Sea Fleet seamen.