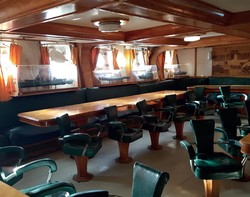 In the corridor, in front of the entrance to the wardroom, there are stands with photographs telling the visitors about the history of the cruiser "Mikhail Kutuzov", and the ship's bulletin-board newspaper.

There is an impressive bronze ashtray in the officers' wardroom. When a ship slides down the ways, its manufacturers present an ashtray to it. It is considered a symbol and averter of the ship. If someone steals this item, or it is passed to someone else, this is considered to be an omen of misfortune. This ashtray was executed in 1954 and weighs 36 kilograms.

The cruisers under the 68bis project-series were named in memory of the great Russian naval commanders and battle captains. Therefore, a valuable item in the exposition of the military-glory cruiser "Mikhail Kutuzov" is the bust of the renowned Russian military leader Field-Marshal Mikhail Kutuzov. The exposition in the cabin of the Chief of Staff is dedicated to Field-Marshal M.I. Kutuzov.

One may find out more about the sailors' everyday life in the crew quarters.