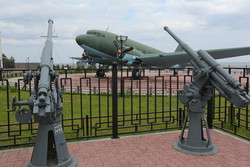 The open-air exposition of "The Road of Life" museum complex displays the ships that defended the Ladoga course, elements of ship equipment, a Li-2T transport plane and artillery weapons.

The transportation on the water course and its defense during the war was performed by the Ladoga navy and the North-West river shipping. The ships of the Ladoga navy bombarded the enemy positions ashore, supporting with fire the actions of the ground troops at the front line near Ladoga, participated in the landing of the Red Army assault forces and destroyed the assault forces of the enemy, and engaged in combat with enemy ships. Together with the ships of the North-West river shipping they went over "The Road of Life", transporting cargo, evacuating the civilians and the industrial equipment of Leningrad.

At the open space of the museum complex one can see the tug-boat "Izhorets-8" and a self-propelling two-holder cutter. "Izhorets" is a type of tug boats that were constructed at the Ust-Izhorskaya shipyard in 1934-1940. During the Great Patriotic War these steamboats were used for military purposes as minesweepers, patrol vessels and gunboats. "Izhorets-8" was built in 1935. During the war it served under N. D. Baboshin and transported cargo in barges between Osinovets and Kobona at Ladoga. In 1976 it was given to the branch of the Central Naval Museum "The Road of Life" and installed outdoors.

By the beginning of the second military navigation the number of vessels had significantly increased. 118 two- and one-holder cutters with the capacity of 25 and 15 tons respectively were built specially for Ladoga. They were equipped with car engines from ZIS-5 trucks with the capacity of 75 horse powers that provided the speed of 5 to 6 knots. Cutters did three journeys per 24 hours at "The Road of Life" and transported to Leningrad more than 150 thousand tons of food supplies and almost 100 thousand soldiers during the navigational season of 1942. In 1943-1944 these cutters were used in order to land assault forces and for mine installation mine sweeping in different parts of combat – at lakes Ladoga and Chudskoe and in the Baltic sea.

The open air part displays fragments of equipment from the ships that sailed Ladoga during the Great Partiotic War: the screw propeller and mooring bollard of the "Bira" gunboat, the Hall's anchor from the "Constructor" patrol boat and a fragment of the side of the "Bureya" gunboat with letters from the ship's name.

The gunboat "Bira" was built as a hopper barge by the order of Baltic Technical Fleet in Hamburg (Germany) in 1940. In July 1941 it was changed into a gunboat and served at Ladoga until 1944, escorting ships and transporting troops and cargo. During its service it was damaged several time by air bombs and shells. It supported landing and offense operations. Several other gunboats served at Ladoga together with it, such as "Selemdzha", "Olekma", "Bureya", "Nora".

At the center of the museum complex one can see the Li-2T transport plane. Aviation played a significant role in the life of the besieged Leningrad. An air bridge for the emergency transport communication between the besieged Leningrad and the rest of the country was established in September 1941. Before the ice route started working in its full capacity the air transport to the city made up for a significant part of the total cargo traffic. According to the decree of the State Defense Committee "On the organisation of transport air communication between Moscow and Leningrad" dated September 20, 1941, 100 tons of cargo were supposed to be delivered to the city daily, and 1,000 people were to be evacuated from the city. On November 21, 1941 the maximal part of cargo was delivered to the city, equaling 214 tons. From September to December 1941 more than 5 thousand tons of food supplies were delivered to Leningrad by air, and more than 50 thousand people were evacuated, including qualified workers, experts, scientists and children. The main passenger and cargo transportation was carried out by outdated TB-3 planes and new Li-2 planes based on the American Douglas DC-3. In 1942-1945 the Tashkent plane factory produced 2,258 Li-2 planes which were used in different modifications: as transport, troop carrying and bombing planes.

The fight for the air space over Ladoga was fought by land, naval and air forces. "The Road of Life" was protected in the sky by the fighter planes of the Ladoga air group of the Ladoga Navy. Aircraft guns were placed on the banks of the lake, covering with their fire the air space over the water and the ice routes. An important role in the defense of transport convoys from air was played by the ships of the Ladoga Navy. All battleships were first of all equipped by aircraft or universal guns that helped them successfully break up the raids of enemy bombing and fighter planes.

On the embankment of the museum complex one can see the ship artillery dating back to the Great Patriotic War. The 45 mm 21-K canon was in the inventory of all ships and submarines of the Soviet Navy – be it large or small auxiliary ships – and was the most common air defense gun in the navy. The 76 mm naval air defense gun was installed practically at all Soviet ships: battleships, cruisers, frigates, torpedo-boat destroyers, submarine chasers, auxiliary vessels and also armored trains. The 37 mm 70-K canon put into service of the Navy in 1940, gradually replaced the outdated 21-K guns during the war. The 85 mm 90-K artillery piece was developed in 1941 in order to replace 34-K. 320 such artillery pieces were manufactured in 1942-1949 in Sverdlovsk. The V-11 naval anti-aircraft mount (a coupled 37 mm artillery mount) was developed on the basis of 70-K, was manufactured starting from 1944 and was produced batchwise after the war at factory No. 4.

In order to efficiently resist the advancing land troops of the enemy, to prevent the landing of German and Finnish assault troops, in order to win in combat with enemy ships and to help the land troops during their advance the ships of the Ladoga navy regularly used their medium caliber artillery. Thus, the gunboats and patrol vessels of the Ladoga fleet were equipped with 100 mm and 130 mm guns. The 130 mm B-13 artillery mounts of different modifications were the main weapons of the Soviet project 1 frigates, project 7 and 7U torpedo-boat destroyers, a number of mine planters and gunboats, including the ships of the Ladoga Navy. Besides that, they were also used at the coastal batteries. The B-13 guns had a high rapidity of fire, could shoot at a distance over 25 km and thanks to that could effectively shoot at ships and land troops of the enemy and launch massive fire at air targets at small and very small heights. The advantage of this artillery mount was the simplicity of its construction which allowed to install it even on small auxiliary vessels. Among its disadvantages one can name the short service life of the barrel. The first B-13 series had box-like mantlets, the second one had streamlined mantlets, and the third one had a different rammer construction. In total 885 B-13 artillery mounts were manufactured throughout this time. The artillery mounts in the T-34 tank turret with 76 mm caliber canons were in the inventory of the armored boats of the Ladoga Navy.

The advance of German and Finnish land troops was held back with canons and howitzers, tanks and mortar launchers that the Red Army troops defending the city were equipped with. The stubborn fightback of the Red Army soldiers, seamen and local inhabitants did not allow the enemy to enter the city or move further along the bank of Lake Ladoga in order to cut Leningrad off "The Road of Life'. The 76 mm 52-P-353 regiment canon designed in 1927, the 76 mm ZIS-3 squadron gun designed in 1942, the 122 mm M-30 howitzer designed in 1938 and the 152 mm D-1 howitzer designed in 1943 took part in the defense of Leningrad from land and the breach of the siege around the city.

At the territory of the museum next to the embankment one can see the stepping stone of a monument that will be installed in the honor of the defenders of "The Road of Life". The project of the monument was created in the M. B. Grekov military artists studio with contributions from the staff of the Central Naval Museum.