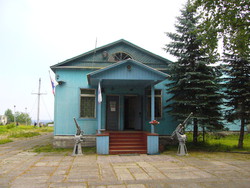 The branch opened its doors for visitors on September 12, 1972, on the day of the 31st anniversary of the war communications on water. The museum was placed in the building of a former bakery on the bank of Ladoga, not far from the Osinovets cape from which the legendary "Road of life" once began. During the time of the Great Patriotic war this building served as a canteen; besides that, it had a "Red Corner" and it housed the administration of the Osinovets naval base. The building suffered great damage during bombardments, and had to undergo serious reconstruction in order to be turned into a museum: it got a new roof, and the interior and exterior parts were also renovated.

The exposition of the "Road of life" museum was created by the staff of the Central Naval Museum with the active participation of the branch staff. This work was largely contributed by the academic secretary of the Central Naval Museum E. P. Kushnarev, director of the collection department L. S. Zolotorev, chief custodian of the Central Naval Museum L. L. Kurochkin, director of the collection department G. P. Osetrov, senior custodians L. L. Larionov, M. M. Farafonov, L. A. Shimkevich, T. P. Akulova, P. V. Krutov, B. P. Levchenko, senior researcher A. P. Kulikov, researcher V. B. Morozova, branch researchers E. F. Kuzmin, L. A. Goydina, I. A. Kagarlitskaya and others. Army and Navy veterans headed by the head of the Council for the promotion of the Central Naval Museum branch "The Road of Life", a retired rear-admiral S. V. Kudryavtsev, took a most active part in creating the museum exposition. The former commander of the Ladoga navy, vice admiral V. S. Cherokov, the chairman of the Veteran council of the Ladoga navy Z. G. Rusakov, the former comissar of the Ladoga navy N. D. Fenin, the former deputy commander of the North-West river shipping A. N. Novoselov, the chairman of the Veteran motor corps council A. L. Peisakh, the Ladoga veterans V. K. Shurpitsky and L. D. Ivanov, the head of the Osinovets ship repairing yards B. M. Sariban, the head of the Kobono-Koredzhsky port P. V. Voyk and others also contributed to the creation of the museum "The Road of Life".

On site the work was headed by the military comissar of the leading torpedo boat destroyer of the Baltic fleet "Leningrad" in 1942-1943. He was first rank captain Pyotr Lazarevich Redkin, the first manager of the museum branch, who put a lot of his energy, work and creative initiative into the development of the branch exposition. The exposition of the museum included articles from the collection of the Central Naval Museum, materials from personal archives collected for the exhibition, and constantly received new items thanks to the participation of military and social organisations and search parties who lifted the monuments of war history from the bottom of Ladoga. The seamen of the Red Banner Leningrad naval base and the employees of the North-West river shipping made with their own hands and donated to the museum more than ten models of the ships that had taken part in combat and transportation on Lake Ladoga during the war. A car factory from Gorky donated the models of GAZ-AA cars to the museum. Thanks to the efforts of the Ladoga veteran A. N. Ivanov the tug-boat "Izhorets-8" was found and permanently anchored as a part of the museum. The cars that once were used for transporting cargo and evacuating people during the siege were exhibited at an open ground. The members of the Komsomol of the North-West Department of Civila Aviation installed at the museum a transport plane Li-2. Anti-aricraft, field and naval weapons were placed at the same spot. In 1977 artillery weapons B-13 from Ladoga gunboats and a 76 mm turret gun from an armored boat from the Ladoga navy were brought and installed at the museum. In 1978 the museum "The Road of Life" published a guidebook prepared by V. F. Pavlyuchenko and P. L. Redkin.

From the very start the museum became the meeting point for the veterans of the Great Patriotic war and the venue for the yearly festive occasions dedicated to the Victory day. "The Road of Life" museum branch housed more than 15 mass events per year organised by military base commanders, including the administration of the oath, the handing out of shoulder marks to junior officers etc. The Central Naval Museum branch "The Road of Life" became a part of a full museum complex which included the Ladoga burial mount, the place of reburial for the soldiers who had died during the various periods of the siege of Leningrad.

On the occasion of the 70 year anniversary of the victory in the Great Patriotic War a decision was taken to fully reconstruct the grounds of the museum branch "The Road of Life". By the opening of the reconstructed museum complex on May 9, 2015 a new building had been built for the storage of large exhibits, together with a new embankment, landscape gardening works and some new additions to the open-air exposition. The GAZ-AA car and the Li-2 plane underwent a large-scale restoration. By the Navy Day in 2016 the modern museum building had been built, together with the administrative complex and the pavilion for the MO-4 type armored boat of the Ladoga navy. The tug-boat "Izhorets-8" had been renewed and repaired, and a number of items from the collection of the Military Historical Museum of Artillery, Engineers and Signal Corps and the State Memorial Museum of Defense and Siege of Leningrad were given to the museum for temporary preservation as a part of collaboration projects. The Culture Department of the Russian Ministry of Defence, "Euro-Lux" LLC, "GUOV" ZVO LLC, "Stroi Invest" LLC, "Remfasad" LLC, "Kronstadt tekhnologii" LLC, "Lazkom plus" LLC, "Arsenal" LLC, "Aria" LLC and "Admiralteyskie verfi" OJSC took part in the creation of the new museum complex "The Road of Life".