Behind the ship armour 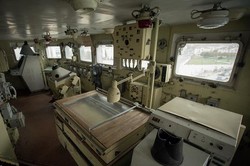 The cruiser's pilot house is the ship's control post and its "brain". During the march, it is a principal place of the captain or the first mate, as well as a steersman, deck officer and other persons, in accordance with the march schedule. The deck officer, watch officer and other officers used to read the information of the ship's control devices and reported the current situation to the commander. The commander received the officers' reports and issued ship-handling orders.

The room is equipped with necessary devices and units: engine and steering telegraph, heading gyroscope, combined plane position indicator used to process the information from the radar stations, etc.

Upon commencement of the sea passage – and, as a rule, the cruiser stood out to sea not independently, but as a part of detachment of warships, as a flagship (command ship) - all the ships that put out to sea along with the cruiser were operated from the duty officer's deckhouse.

During the upgrade, the combat information centre was installed on the cruiser under a pilot bridge, which accumulated all retrieved information about the air, surface and submarine situation, navigation safety and on the ship's stocks: ammunition load, fuel, rations, boiler and drinking water, machinery.

The bow superstructure houses a chart house and a command communication post, as well as combat stations of the gunnery department, communications department and radio technical service. In the event of hostilities, the ship control passed from the pilot bridge to the conning tower located in the bow armoured box behind the pilot bridge. The deckhouse was armoured.

The chart house was the place to control the course, speed and movement of the ship and the targets on the way. The navigator plotted the route on a special plotting board with a map.

The wardroom was used for joint meals and meetings, solemn events. There were two wardrooms on the cruiser: one for the officers and one for the midshipmen. All members of the wardroom addressed each other by their first name and patronymic, without military ranks. It was possible to smoke without the permission of the ship's commander, but only during the strictly designated time: from 18:00 to 22:00. In the years of the cruiser's service, only 72 officers and 4-5 stateroom stewards who served meals had access to this room.

The traditions of wardroomship were inherited from the English sailing fleet. The officers came for the meal in the established daily undress uniform. Sunday lunches were to be attended in dress uniform. Every officer had his own place, assigned to him. Taking someone else's place was considered to be a "mauvais ton".

There was a tacit rule: it was unacceptable to come to the wardroom after the first mate.

The tables were covered with slightly damp tablecloths, to prevent the dishes from moving during the roll. The ship's dinnerware was used for taking meals: ceremonial or casual.

Food was served from a special cupboard.

The flag officer's compartment of the ship was repaired, equipped and opened for the visitors by the staff of the cruiser. The visitors get acquainted with the everyday life of the senior officers, visiting the cabin, bedroom and salon of the flag officer. The exposition also presents a number of open-access naval documents. The flag officer's cabin housed the top officials. Those were senior commanders: a cruiser group commander or a fleet commander. Despite the high rank of the guests, the flag officer's cabin is not armoured - it is sheathed with 10-mm ordinary steel; however, the refreshment room armour (for comparison) was 130 mm.

The quarter-deck salon was intended for recreation of the commanders, for cultural leisure, playing music, celebrating events and anniversaries, holding meetings. The room has a chess table, a piano, leather sofas, large tables, shelves with books.

It is decorated with valuable wood species, equipped with soft furniture. An indispensable attribute was a large work table.

Compared with the flag officer's cabin, the ship officers lived in quite modest conditions.

As a rule, a cabin accommodated one or two persons. The cabin had a sleeping berth (usually with cork mattresses), a desk, a sofa for receiving visitors. The officer, in addition to having rest, received his subordinates in the cabin. The decoration of the officer's cabin was not in fact refined, but was very functional, since the officer spent all his off-duty time there.

To accommodate the ship staff, 38 crew quarters of different capacity were used, to house from 20 to 80 persons. The berths in the crew quarter were arranged in three tiers. The crew quarters were located on the first and second complete decks. The crew quarter on the photograph can be called premium: it is designed for 27 sailors and equipped with portholes, which is not characteristic of similar cabins one or two decks below. The locker was covered with a mattress and was used as a bed. But this place was considered the least prestigious in the fleet - it was intended mostly for recruits.

Once a day, from 7:30 to 8:00, the crew was given a command to procure fresh water. Those who failed to do it stayed without tea for the whole day. Only officers and midshipmen were granted a leave. Military-conscription sailors were given this privilege only for certain merits, so they might have no vacation for all of the three years - only service.

The medical unit had its operating room, a post-surgery room, an infirmary for 24 persons, a pharmacy, an X-ray room, an isolation ward for 6 persons and the doctors' offices.

There were three doctors on the ship: a therapist, a surgeon and a dentist. Simple operations like appendectomy were performed directly on the ship by the surgeon. However, there was no need for complicated operations - the cruiser "Mikhail Kutuzov" is famous for the fact that no death fatal accidents ever happened onboard throughout its history.

Two galleys (kitchens) were structurally envisaged for cooking. The officers, midshipmen and sailors had four meals a day: breakfast, lunch, dinner and evening tea. The menu for all the staff was the same: soup, mashed potatoes, cutlet, compote. The officers had a supplementary ration to each meal: sausage, cheese, biscuits, jam. Only the ship commander had meals separately.

50 cooks were simultaneously engaged in the galleys.

The postwar-construction ships had no dining rooms up to the 60s – the seamen had meals directly in the crew quarters under a bowl-based system. The so-called bowl-man was appointed for every division of 6-8 people: he went to the galley deck, when summoned, and was given a bowl for soup and for the main course, as well as a kettle. That food was brought into the crew quarter where the seamen had meals at the folding-tables ("bowls") set in the aisles.