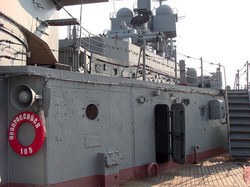 The main purpose of the cruiser is fire support in amphibious operations, escort of maritime convoys, reconnaissance, actions on enemy's communications, mine-laying operations.

To ensure the ship's damage control and subdivision, its hull is divided by watertight bulkheads into 16 main compartments. The cruiser has 3 decks (foredeck, 1st and 2nd continuous decks) and 3 platforms. The upper deck of the cruiser has a wooden flooring.

According to the tactical requirements, in case of flooding of three adjacent compartments, the cruiser stayed afloat; the (design) critical angle of vanishing is 89 degrees.

To protect the crucial parts of the cruiser, general and local armouring is provided. The bulk of the armour was applied to the armoured box (ribs from the 32nd to the 170th), consisting of an armour belt (100 mm) and beams (forward – 120 mm, sternmost – 100 mm) covered with 50 mm protected deck (2nd complete deck); the conning tower armouring - 130 mm. The subsurface protection from torpedo and mine weapons was provided by the double bottom.

The power generating unit of the cruiser "Mikhail Kutuzov" comprised a steam-turbine mechanical twin-shaft unit and an electrotechnical unit; it was located in 12 compartments. The mechanical unit included six main steam generators of КВ-68 (КГ-68) type. They were placed with auxiliary mechanisms in gas-watertight compartments - in boiler rooms. Two main geared-turbine units of ТВ-72 type, with the capacity of 55,000 hp, were installed in the engine rooms. This allowed the cruiser to develop the maximum speed of up to 32 knots (60 km/h). Using the endurance speed (18 knots), the cruiser could cover 7,500 miles. The steering electro-hydraulic machine was in the steering room. A separate hall housed an auxiliary boiler installation providing due operation of the turbine generators and fire safety upon the ship's anchorage.

The electric power generation was provided by five turbo-generators of ТД-6 type and four diesel generators of ДГ-300 type with a capacity of 300 kW each.

The stock of water and food supplies enabled the cruiser to be in independent cruise for up to 30 days. The cruiser had no restrictions in terms of navigability.

The availability of two high-capacity evaporators for production of boiler water, reliable in use, provided the crew with washing water.

The cruiser "Mikhail Kutuzov" was entirely built from domestic materials, its hull was all-welded. It was destined to become a major achievement in the world and national shipbuilding.

There was also a repair depot on board the cruiser - metalwork shop. The equipment allowed the crew to carry out in fact any repair work directly in the sea - electric welding, gas cutting, machining, electrical installation, etc.