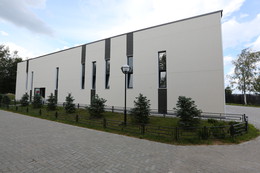 On November 13, 1941 the decree "On the organisation of construction of an ice route on water from Osinovets cape to the Karedzha lighthouse" was signed by the Administration of Logistics of the Leningrad frontline. The construction was managed by the 3rd rank military engineer B. V. Yakubovsky. He received under command one labor battalion, the 165th construction battalion and the 88th nonintegrated bridge construction battalion. General management was performed by the commander of the road transport department of the front line, the 1st rank military engineer V. G. Monakhov. All preparation works were concentrated at the Administration of Logistics of the Leningrad frontline commanded by lieutenant general F. N. Lagunov. After a study of the ice structure by the hydrographic department of the Ladoga Navyon November 19 decree No. 00172 "On the organisation of an auto route through Lake Ladoga" was signed for the forces of the Leningrad frontline. Starting from November 26, 1941 the ice route was called Military auto route No. 101 (VAD-101).

On November 21, 1941 the first car with F. N. Lagunov and B. V. Yakubovsky went on the ice route. On November 22, 1941 a caravan of 60 GAZ-AA trucks under the command of captain V. A. Porchunov went from the West bank. The cars were loaded with rye flour in Kobona and went back in the early morning of November 23, 1941.

The GAZ-AA and ZIS-5 cars are exhibited in the storage shed together with other materials telling about the creating and functioning of the ice route. The past of these exhibits deserves special attention: the GAZ-AA was lifted from the bottom of Lake Ladoga in 1947, and ZIS-5 went on the frontline roads all the way from Lake Ladoga to Berlin.

The exposition also displays large exhibits dating back to the Great Patriotic War: a field kitchen, different types of sea mines, a magnetic sweep, a distance gage and others. The stands and glass cases show materials telling about the creation, use and defense of "The Road of Life".

The exhibits demonstrate the armament and technical equipment of land and navy corps who fought bravely during the defense of Leningrad in 1941-1944.