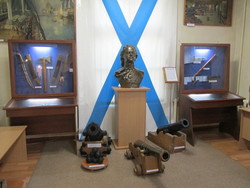 The first section of the exhibition hall tells the visitors about the origination of the Baltic Fleet and its victories in the 18th century. In the centre is a bust of Peter I whose name is associated with the return of the native Russian lands, the birthing of the regular Navy, its conquering the expanse of the Baltic Sea.

The hall exhibits the boarding weapons and artillery guns of the 18th century. Since ancient times, the boarding battle has been the main tactical manoeuvre at sea with the use of cold weapons. To clutch the enemy's ship, boarder hooks, crampons, boarder cutters, axes were used; for combat operations – handguns: pistols, blunderbusses, shot-guns.

The second section of the hall exposition presents the steamship and armoured Baltic Fleet. The Crimean War of 1853-1856 finalized the centuries-old history of the sailing fleet. The sail- and wood-based fleet gave way to steamship, propeller-driven and armoured fleet. Ship's armour took its origin: initially – just stapled steel sheets. At first, coastal defence armoured ships were built, and further, from the end of the 60s, large armoured ships were manufactured; their models are presented at the museum.

Among the exhibits of the exposition hall, of special interest is the furniture from Kronstadt office of Vice Admiral Stepan Osipovich Makarov, a multifaceted person: scientist, oceanographer, inventor, researcher, naval theorist who devoted many studies to the period of grandiose transformation of the fleet. One can see an engraved inscription on the desktop clock - the motto of his life "Remember the war!"

The final section of the exposition describes the participation of the Baltic Fleet ships in the First World War at the Baltic Sea, which gave impetus to the further development of artillery, torpedo and mine weapons, contributed to the emergence of antisubmarine bombs and to the widespread introduction of radio communications at sea.