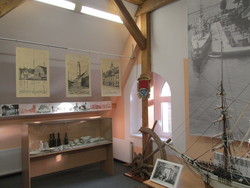 The first references in the historical sources about the settlement of Pil date back to the 18th century. Later, several settlements grew on the territory that formed the present city of Baltiysk (Pillau): Vogram, Old Pillau, New Pillau, Kamstigal, Fishdorf, each characterized by its specific occupation at different times.

After the construction of the Pillau citadel securing control over the entrance to Kaliningrad (Vistula) Lagoon from the Baltic Sea, the appearance of the city changed as well. It extended owing to the buildings grown near the fortress on the peninsular territory shaped like a hook, called "Haken" by the locals (from the German word denoting a hook). A number of buildings were erected in Haken at different times from the moment of laying the citadel to the commencement of the Great Patriotic War - a windmill, a lighthouse, storage facilities, 12 breweries, 4 bakeries, 3 butcher's shops, a pharmacy and others.

In 1945, the city became a huge marine transhipment point for evacuation of the residents of East Prussia and the retreating German troops. On April 25, during the East Prussian operation, the city was taken by assault by the 11th Guards army of the 3rd Belorussian Front, and on April 26 the unassailable forward stronghold - citadel Pillau (Baltic Fortress) - was seized.

At the end of the war, by the resolution of Potsdam Conference, a third of the East Prussian territory, including Pillau, was passed to the Soviet Union.

On November 27, 1946 the city was renamed Baltiysk by Decree of the Presidium of the RSFSR Supreme Soviet.