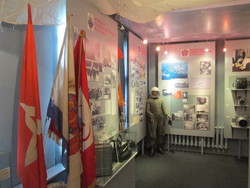 The history of creation of intelligence structures in the Baltic has its roots in the Petrine era. However, the date of birth of the naval intelligence is 1904, when the naval intelligence service was officially instituted. Special ships were stationed at foreign bases, moored for several months in the rear of a possible enemy, and reported necessary information to the Naval Ministry.

Admiral A.I. Nepenin was a person in charge of introduction of the Russian fleet radio reconnaissance in 1911. The invention of radio  by a scientist A.S. Popov, and of a radio direction finder by I.I. Rengarten enabled the Navy to proceed to development of a system for detecting and monitoring the enemy, as well as for reporting the fleet forces on its actions.

During the war, reconnaissance and secret subversive groups were inserted into the enemy’s rear; aerial photography was made by the Baltic Fleet pilots. The government paid much attention to the development of all kinds of intelligence in the postwar period. In particular, in 1956, the Minister of Defence Marshal G.K. Zhukov issued an order on organization of special Naval forces (special mission units).

The reconnaissance acquired new tools with the development of technologies: powerful photographic cameras that made it possible to engage in photographic survey from high altitudes; wiretapping and electronic devices for various purposes. This extended greatly the resources of intelligence and commando-type reconnaissance, which made it possible to complicate the tasks of naval scouts. The missions of special force agents encompassed reconnaissance at sea, destruction of missile launchers, command posts, ships, enemy’s hydraulic structures, etc.

Among other exhibits of the hall is a self-propelled submarine towing vehicle “Protey-5MU”. Today, many secret operations cannot be effected by frogmen without special waterborne vehicles and facilities; for instance, they are assisted in undetected autonomous sub-aqua by special self-propelled submerged diver delivery vessels.