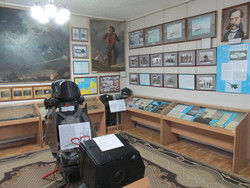 The history of development of the Baltic Fleet naval aviation is covered by the exposition at a separate hall.

The Russian aircraft designers I.I. Sikorsky and D.P. Grigorovich became the first designers of Russian airplanes, including hydroplanes widely used in the Baltic Fleet during the First World War and up to our days.

By the onset of the Great Patriotic War, the naval aviation included reconnaissance air fleet, fighter aircraft and bombardment aviation. In total, the Air Force of the Red Banner Baltic Fleet numbered 709 airplanes.

Already from the first days of the Great Patriotic War and until September 4, 1941, the marine aviation bombarded Berlin as a retaliation for air raids of Moscow. The aircraft took off from the Moonsund archipelago airfields in three groups: under command of E.N. Preobrazhensky, V.A. Grechishnikov and A.Ya. Efremov. All of them were awarded the title Hero of the Soviet Union. One can see A.Ya. Efremov’s military raglan in the museum.

The Baltic Fleet aviation took part in the hostilities from the first days of the war to its end, during which it successfully bombed the enemy forces, torpedoed their vessels at sea, transported military cargoes.

The appearance of supersonic aircraft opened a new page in military aviation, which also demanded new types of weapons; some of them are presented in the hall.