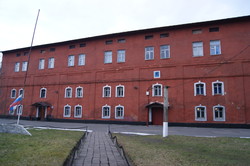 The fortress structures of Pillau (Baltiysk) represent a monument of military-defence architecture. This is a unique masterpiece of European fortifications of the 17th-20th centuries, of the history of engineering thought and construction art, as well as the main attraction of the city. The fortress Pillau is located on the shore of a strait which was formed in the 15th century.

The construction of the fortress began in 1626, during the Swedish-Polish war, on the order of King of Sweden Gustav II Adolf. Until 1635, the fortifications were shaped as earthen ramparts framed by a wooden stacket. In 1640, Prince Elector Frederick Wilhelm the Great came to power in Prussia, who supervised the construction of a fortress made of stone and brick. The fortress citadel represents a pentagon with 80-metre sides - a five-pointed star, where each corner is a bastion bearing its own name: Albrecht, Prussia, König (King), Königin (Queen) and Crown Prince (Prince Royal).

The inner courtyard of the fortress once contained barracks, warehouses, workshops, a prison and a church, the houses of the main priest, the governor and the commandant; an arsenal. Unfortunately, only the curtain warehouses and three buildings on the territory have been preserved to our days.

The history of the Baltic fortress is closely connected with the development of the Russian state. In 1697, the future emperor of Russia Peter I visited the fortress for the first time. Here he studied bombardier and artillery art, as well as fortification art.

From 1758 to 1762, East Prussia was a province of Russia, where Empress Elizabeth was called "King" of Prussia. During these years the fortress was under the authority of Russian commandants, and its garrison consisted mainly of Russian soldiers. The close cooperation between Russia and Prussia continued in the following centuries, and fortress Pillau played an important role in it.

The Second World War did not miss the Pillau citadel. In April 1945, the city faced severe battles. On the night of April 26, the soldiers of the 1st Proletarian Moscow-Minsk Division under command of Major-General P.F. Tolstikov took possession of the fortress after a storm. All the subsequent history of the citadel is connected with the Baltic Fleet.

In June 1994, the fortress was included in the state register as a monument of history and culture, and in 1999 a number of fortifications were transferred to the Baltic Fleet Museum by a Directive of Baltic Fleet Commander Admiral V.G. Egorov.