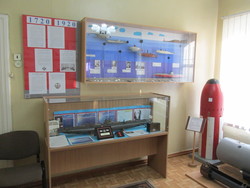 The exposition of the hall tells one about the history of creation of the submarine fleet in the Baltic. People’s interest in underwater floating arose in ancient times. In Russia, the first serious attempt to create a subsurface vehicle was made by a shipyard carpenter Yefim Nikonov who submitted a humble petition to Peter I for construction of a secret ship - a prototype of a submarine.

An outstanding event in the field of submarine shipbuilding was a test of the world's first solid-metal submarine built after the design of military engineer K.A. Schilder, held in 1834 in St. Petersburg. Later, the Russian engineers I.F. Aleksandrovsky, S.K. Dzhevetsky made a great contribution to the development of the submarine fleet - they developed various projects of submarines, including those with an electric motor powered by accumulator batteries.

At the beginning of the 20th century, submarines were seriously considered as a means of combating the enemy. The first Russian submarines that entered the fleet as battle ships in 1904 were “Dolphin” submarines that took part in the Russo-Japanese War.

The most state-of-the-art ships in the First World War were submarines of "Bars" type, represented in the hall by a model of "Panther" submarine.

The first submarines constructed in the Soviet Russia, comprising submarines of М, Щ, С types, had insignificant displacement, which made them suitable for use in the Baltic, for they had high tactical and technical elements.

The submarine M-81, which took part in military patrol in the first days of the Great Patriotic War, was blown up by a bottom mine and sank in July 1941. It was discovered by a search expedition in 1949 in the Baltic Sea near the Island of Vormsi and was raised in 1965. The authentic exhibits from this submarine are exhibited in the museum.