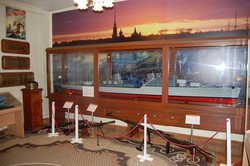 The seamen of the Baltic Fleet covered themselves with unfading glory during the Great Patriotic War of 1941-1945. They defended Tallinn, Moonsund Islands, Hanko Peninsula, took part in the defence of Leningrad, supported the offensive of the ground forces in the Baltic, East Prussia and Eastern Pomerania, inserted tactical and operational forces in the rear of enemy troops, engaged in transportation of large groups of the Red Army.

A separate exhibition is dedicated to this short, but very important period in the history of our country. It presents uniform items, original documents, awards, photographs, weapons of Baltic sailors - participants of the Great Patriotic War, as well as their personal belongings.

The most interesting of them are a handbag and a comb of a junior lieutenant combat medic Aleksandra Serebrovskaya who was killed during the seizure of Pillau; an identification medallion of a soldier Ostrov Konstantin Alekseevich who was lucky to survive after a blast injury he got during the storming of the Pillau citadel.

A special window-case exhibit is the leaflets dated March - April 1945 with an appeal to the German soldiers to surrender and to stop the senseless bloodshed; two of them were signed by General Otto Lasch, commandant of the city and of the Königsberg fortress. On April 9, Lasch issued an order to surrender the garrison and launched an appeal to the German troops on the radio to stop resistance.