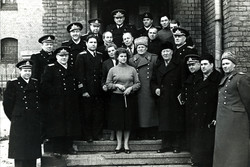 The Baltic Fleet Museum is one of the young maritime museums in Russia. In 1957, a Directive of USSR Navy General Staff Headquarters was issued, prescribing to set up a naval museum in Baltiysk.

The staff of St. Petersburg Central Naval Museum rendered tremendous help in formation of the exposition. They provided ship models, 18-century boarding weapons, old books, paintings of modern marine painters. The veterans of the Great Patriotic War, military seamen, navy craftsmen and local residents helped actively in the search of historical memorabilia, and on February 23, 1959 the museum halls were opened to the visitors.

Three years later the museum was transferred to Tallinn, the main base of the Red Banner Baltic Fleet, where its further development took place within the next thirty-odd years. And in 1992, upon withdrawal of the fleet from the Baltic countries, the Baltic Fleet command took a decision to relocate the museum, returning it to Baltiysk. And the museum exposition was arranged again in the same building where it originated - an architectural monument of the early 20th century built in a pseudo-Gothic style.

Today, the museum's collections number more than twenty thousand items. Of great interest are the belongings of the officers and admirals of the Baltic Fleet who left their trace in the naval history. The museum contains unique specimens of cold arms and firearms of the 18th-20th centuries, among them - boarding weapons of Peter the Great time. The historical-value exhibit of the museum is a steering wheel from the imperial yacht "Polar Star" which was at the service of the family of the last Russian Emperor Nicholas II. Of special importance among the ship models is a model of 44-gun frigate "Pallas".

The museum's collection contains a number of items that belonged to famous admirals: M.P. Lazarev, I.F. Kruzenstern, Vice-Admiral S.O. Makarov. Of great value are the foundation plates of the Baltic Fleet ships of the 19th–20th centuries.

One can visit the "Baltic Fortress" as a separate event. The citadel founded in the 17th century, with its bastions, preserved to this day, is the main historical attraction of the city.

The Baltic Fleet Museum has been a branch of the Central Naval Museum from 2012.