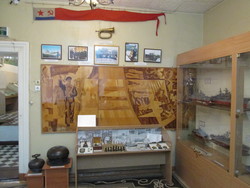 The exposition of the hall covers the history of development of the surface fleet in the Baltic Sea, represented mainly by models of ships released from staples from 1914 to the present time.

The destroyer “Gabriel”, launched on December 23, 1914 and incorporated into the Baltic Fleet on November 25, 1916, was one of the most advanced ships of its time, equipped not only with guns, but also with torpedo tubes and mines. Its model and lifebuoy take a central place of the hall.

With the development of the fleet, its tactics and operations were continually improved; new classes of vessels appeared, equipped with more up-to-date weapons, including missiles. After the Great Patriotic War that demonstrated in practice the need to develop other types of ships, the assault landing ships, fleet destroyers of the next generation were put into operation. Missile ships of Project-956 “Nastoichivy”( "Persistent") and “Bespokoiny” (“Restless”), destroyer escorts of Project-1135 “Neukrotimy” ("Undaunted"), of Project-11540 “Neustrashimy” (“Indomitable”) and “Yaroslav Mudry” (“Yaroslav the Wise") replaced torpedo ships.

The exhibition also presents shipboard devices and apparatuses, household items and tableware from the ward-room of the patrol craft "Indomitable", personal belongings of the officers - the first commanders of several ships.